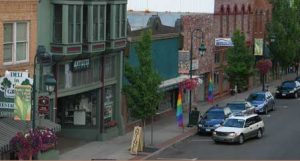 The Historic Downtown is an undesignated area that is centered at the intersection of Pacific Avenue and Main Street. From the intersection, the historic core runs northward a block along Main Street and for several blocks along Pacific Avenue. The late 1880s brought a boom to Forest Grove with the arrival of land speculators and developers. The “Gay Nineties” saw the development of electricity and water facilities in Forest Grove. Much of brick downtown was developed during this period.

The Painters Woods District includes the city’s first sub-division platted in 1891 on a modern design of smaller lots with access to the railroad station. The architectural styles range from Victorian period, Craftsman, Foursquare, Bungalow, Colonial Revival and Ranch. The historic period for construction was 1880 – 1948. Many vernacular homes are within the district boundaries and represent the economic situations of the Great Depression and World Wars I & II. The name of the District comes from R. M. Painter who purchased land from the widow of Rev. Harvey Clark in 1965. The area became known as Painters Woods because of the many trees in the parcel; Oregon White Oak and Douglas Fir. A walking tour brochure is available from the Visitor’s Center.

The Clark National Historic District was created south of downtown in 2002. It is a roughly rectangular area with irregular borders of 19th and 16th Avenues on the north and south, and A and Elm Streets on the west and east. The area is residential with a scattering of churches. The Historic District contains 178 historic sites. The area is named after the Reverend Harvey Clark. Much of the land where the Clark Historic District stands was donated to the Tualatin Academy by Clark as an endowment. The land was originally platted into one-acre lots. Houses were built using a spectrum of architectural styles from Second Empire to Bungalow.

Sojourn Forest Grove offers historic walking tours in the Painters Woods and Clark Districts. Other tours include the downtown and nearby neighborhoods with a large number of historic homes. Tours are scheduled upon request as well as scheduled throughout the year. The Friends of Historic Forest Grove hosts annual garden tours (June) and historic home tours (September) that frequently include homes within the historic districts. 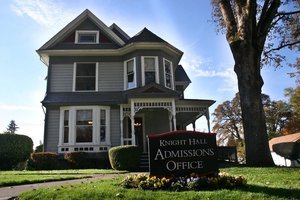 Oregon’s Pacific University is the oldest chartered university in the West. The Oregon Territorial Legislature granted its original charter as the Tualatin Academy on Sept. 26, 1849. The charter predates statehood by 10 years.

The school traces its roots to a log cabin meeting house in Forest Grove where the Rev. Harvey Clark, a Congregationalist minister, and Tabitha Brown, a former teacher from Massachusetts, cared for and educated orphans of the Oregon Trail. The University issued the first baccalaureate degree in the region in 1863. 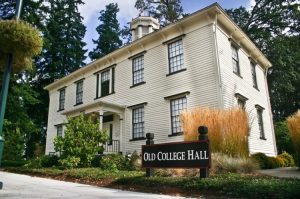 Old College Hall, built in 1850, was the first permanent structure of Pacific University and is one of the oldest collegiate buildings in the western United States. This compact two-story building with its octagonal belfry is symbolic of pioneer building efforts during territorial days and was listed on the National Historic Register in 1974. The second floor contains museum galleries dedicated to the history and cultural influence of Pacific University, as well as treasures from various foreign cultures which reflect the university’s missionary heritage. Old College Hall is open the first Wednesday of each month.

Pacific University Museum is located in the heart of the Pacific University campus at Forest Grove, Oregon. This museum is dedicated to the history and cultural influence of this pioneering, educational institution. The two exhibit galleries are located on the second floor of Old College Hall. The South Gallery contains exhibits on Tabitha Brown (one of Pacific’s founders and official “Mother of Oregon”), Sidney Harper Marsh (Pacific’s first president), the Morse Brothers (including telegraph instruments from Samuel F.B. Morse), and Pacific’s mascots, Boxer and Badger. Boxer has been the official mascot since 1969. 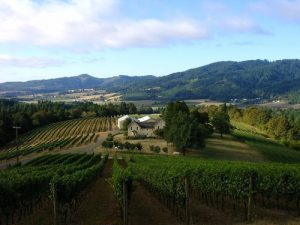 The tasting room is located in a historic farmhouse, originally built in 1883. The farm is on 140 acres of which 40 acres are planted with Pinot Noir, Pinot Gris, Riesling, Chardonnay and Gewürztraminer, with some of the oldest vines in the state.

The land was homesteaded in 1883 (it was then known as Rueter’s Farm), and grapes were planted at that time. Reuter won a gold medal at the St. Louis World Fair in 1904. When prohibition came to Oregon in 1913, the grapes were removed (only a small number of vines were kept for personal use). In 1965 Charles Coury, along with a few other wine pioneers, came north from California to establish vineyards in the Willamette Valley where they believed they could successfully grow Pinot Noir. Here Coury planted his first pinot noir grapes vineyard in Oregon.