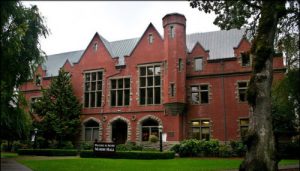 Oregon’s Pacific University is the oldest chartered university in the West. Today, Pacific is a comprehensive liberal arts, education, optometry and health professions university with 3,200 graduate and undergraduate student.

The original campus adjoins Historic Downtown. In addition to the outstanding courses, there are many reasons to visit the campus. You can applaud a dance performance, learn about the work of a local artist, listen to world-famous musicians, cheer on a college baseball or soccer team, attend a stimulating public lecture, enjoy the fun and spectacle of the annual Luau, reflect on the past at the university museum, or unlock new ideas at a conference or seminar. Pacific University is a destination in its own right.

In 1846, a remarkable 66-year-old widow completed a rugged trip west with her family to live in the Oregon Territory. Tabitha Moffatt Brown arrived in Oregon, but not before undergoing much hardship. At one point on the journey by wagon train, she was left alone on the trail in the bitter cold with her ailing 77-year-old brother-in-law. She pulled them through, despite being near starvation, and they reached the Willamette Valley on Christmas Day.

Brown, the Rev. Harvey Clark and his wife Emeline, concerned for the welfare of the many orphans in the area, made arrangements for using a local meetinghouse in Forest Grove, as a school, which became known as the Orphan Asylum. By 1848, Mrs. Brown was “house-mother” to the students there and had become a driving force behind the school.

By 1854 a new charter had been granted, establishing “Tualatin Academy and Pacific University.” Congregational missionaries were key leaders in the establishment and growth of the University, and that legacy is still regarded as an important influence. As an independent university, Pacific continues to maintain ties with the United Church of Christ Council for Higher Education. The University supports religious pluralism, and is committed to instilling a sense of values and ethics, compassion, caring and conscience in both students and programs.

In 1945, the University expanded into the health professions through a merger with the Pacific Northwest College of Optometry.

In 1995, the School of Education, now the College of Education, was established through reorganization of the professional teacher education programs.

A year later, the Physician Assistant Studies program was added. Other health professions programs were launched, including Physical Therapy in 1975, Occupational Therapy in 1984, and Professional Psychology in 1985.

In the same year, new programs in Pharmacy and Dental Health Science were established, followed by a Masters in Healthcare administration program in 2008.

Events Throughout the Year

There’s always something happening on campus. Some of the major events include: The Performing Arts Series, has celebrated its 15th season of world-class music and entertainment performances in the Taylor-Meade Performing Arts Center’s McCready Hall.

The Kathrin Cawein Gallery of Art presents changing exhibits monthly throughout the academic year. Receptions featuring popular artists provide an opportunity to gain a greater insight into their work. At times, these are scheduled to coincide with the exhibits to give the artist a chance to share his or her creative inspirations and motivations related to the works on display.

The Annual Benefit Luau is presented by the Pacific University student Hawaiian Club in order to raise money for community service projects and club activities. This unique event, one of the largest of its kind held on a campus in the US, offers Polynesian music, dance, and entertainment as well as authentic Luau food. In 2010 it celebrated its 50th Anniversary.

The University hosts several commencement ceremonies to celebrate and officially recognize the accomplishments of our graduates. These include: Commencement (May), Summer Commencement (August), and commencements for individual programs. Enjoy Music in May, one of the longest running high school festivals in the US featuring orchestra, choir and band.

Old College Hall, built in 1850, was the first permanent structure of Pacific University and is one of the oldest collegiate buildings in the western United States. This compact two-story building with its octagonal belfry is symbolic of pioneer building during territorial days and was listed on the National Historic Register in 1974.

Pacific University Museum is housed in Old College Hall and is dedicated to the history and cultural influence of this pioneering, educational institution. The exhibits interpret important people–trustees, presidents, faculty, and alumni–as well as special academic programs, events, traditions, and campus buildings.

The two exhibit galleries are located on the second floor of the historic building. The South Gallery contains exhibits on Tabitha Brown (one of Pacific’s founders and official “Mother of Oregon”), Sidney Harper Marsh (Pacific’s first president), the Morse Brothers (including telegraph instruments from Samuel F.B. Morse), and Pacific’s mascots, Boxer and Badger. Boxer has been the official mascot since 1969. The North Gallery covers science education and Pacific’s missionary and educational work.

A stroll around the campus and downtown takes you past many of the state’s oldest giant sequoias. They were nurtured by nurseryman John R. Porter, who moved to Oregon in 1847. In 1849 he was lured to the California Goldfields and returned to Oregon with the cones of the giant sequoia. Some of his “seedlings” can be seen at 1651 Hawthorne and at B Street and Pacific Avenue.